“Frankie has since had Pancreatitis and has been diagnosed with Cushing’s. He still bites but it comes in waves. We consider them our tattoos. He doesn’t take his insulin shots well, but what are we going to do? He has to have them But by and large he’s a sweetheart. Follows us both around and cuddles when he isn’t crazy. Somebody’s gotta love him and we do♥️”

My dear friends adopted Frankie after fostering him. At the time Sharon and Mel took Frankie in to foster he was diabetic and a biter. They have done soooo much for Frankie. He would have died without them. Sharon & Mel are truly the definition of “Rescue Angels.” 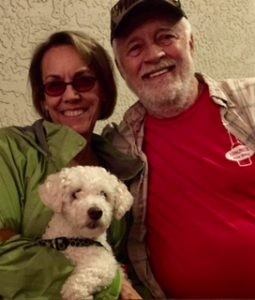 Frankie with his Rescue Angels 💕