December 29, 2015 / JoAnn / Comments Off on In Loving Memory of Charles “Charlie” Darcey 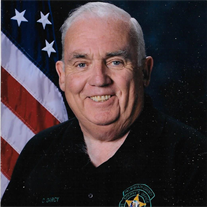 Born In NYC on July 21, 1940, he was the son of the late John and Helen Darcy. Charlie attended Beacon High School and worked for IBM for thirty years. Charlie was one of the original members of the Beacon Ambulance Corp. He was an active member of Mays Hook and Ladder until he moved to Fishkill. Once in Fishkill, he joined Protection Engine Fire Company. Shortly after, he became one of the founding members of the Rombout Fire Department where he spent the rest of his volunteer firematic career. At Rombout, Charlie worked his way through the ranks being voted Chief twice and lastly Commissioner.

After his retirement from IBM, Charlie and his wife Marianne moved to West Palm Beach. Here he volunteered for the local hospital and eventually started working part-time for the Palm Beach County Sheriff in the Special Events Unit. Charlie spent his life doing what he loved most, helping people and spending time with his family.

He is survived by his wife Marianne (Gorges) Darcy of 54 years. They were married on May 20, 1961. He is also survived by their children, Brian and his Children Erin, Ariana and Jillian; Michael and his wife Chris and their son Ryan; his daughter Judi DeFrance and her husband Jeff and their children Michael and Heather and his daughter Lisa Carozza and her children Gabriella and Vincent; his sister Joan Powers and his brother John. He was predeceased by his sister Kathleen Esposito and his Son In Law John Carozza.

Services will be held from 2-4 and 6-8 on Tuesday December 22 at Palms West Funeral Home 110 Business Parkway Royal Palm Beach, Florida 33411. In lieu of flowers the family is asking for donations to be made in Charlies name to Standup2Cancer.org or Destiny for Dogs, 326 Macy Street West Palm Beach, FL 33405 or to any charity of your choice.