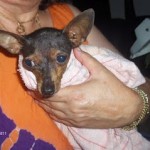 Lupi is a teacup Chi who was seen on several occasions along the railroad track behind some warehouses in West Palm Beach.  Many attempts were made to rescue her, but she was too frightened.  After a long search, and then ten days of offering food and water, we withheld food for a day and then set a humane trap. We had our girl in a few hours! Lupi is the feminine form of the Spanish word for “wolf”.  This poor girl lived like wild dog, right here in the middle of the city!  The first picture is her in her hiding place where she was found, the next is her capture and the final photo is her loving her foster family so much she decided to stay and they decided to keep her.  She has truly found her Destiny!